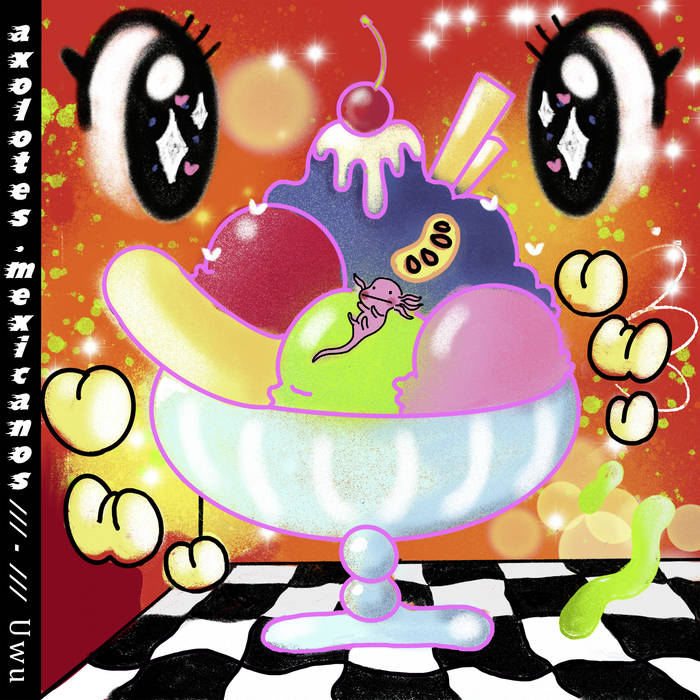 Station Can't stop listening to this. The crazy lyrics matched to pop music and touches of synth are so reminiscent of the craziness of youth. Favorite track: Te Quiero (...).

It has been a while since we heard from AXOLOTES MEXICANOS, but we can’t say the members of the group haven’t been giving us musical and artistic news. Juan and Mario have been unleashing their great talents with CAROLINA DURANTE; Lucas has continued to show us his tremendous personality with CONFETI DE ODIO; and Olaya has continued letting her boundless imagination run wild with illustrations and stagings, and has collaborated with her fantastic voice on the hit “El Fin Del Mundo” by LA LA LOVE YOU, and on the new version of “Programa En Espiral” by EL AVIADOR DRO Y SUS OBREROS ESPECIALIZADOS. Meanwhile, Stephen has gone back to Barcelona and has started playing bass again with the group, while giving us songs from his personal project, under the name Stephen Please and his group NO FUCKS. Yes, the AXOLOTES seem to be one of those groups that are the origin of an infinite number of things. That is why we needed their new songs, so here we have a little dose in the form of a Digital Single: “Uwu”.

And as always, they play up their perfect example of an attitude, beginning with the titles of the songs. “Te Quiero (…)” has a thicker, more solid sound that their previous recordings, maintaining that punk spirit but with traces of noise, for this story of falling out of love, spite, the disappointment of not really knowing where a relationship is going. With, by the way, a totally unleashed Olaya. As if no time had passed, they maintain the freshness, the spontaneity and the virulence of their early days. “Cuando_estoy_contigo.mp3” finds the perfect balance between the punk-pop perfection of JUNIPER MOON and the unclassifiable impulsiveness of LOS PUNSETES. One minute and forty seconds of absolute energy. There is not one extra millisecond.

Despite how young they are, AXOLOTES MEXICANOS are already a key group in the national indie-pop scene, and their new songs recorded and produced by Carlos Hernández (JUNIPER MOON, LOS PLANETAS, TRIÁNGULO DE AMOR BIZARRO, AIRBAG, COOPER...), are the confirmation that they maintain their inspiration and freshness intact, with a much more solid sound. Yes, we want more.