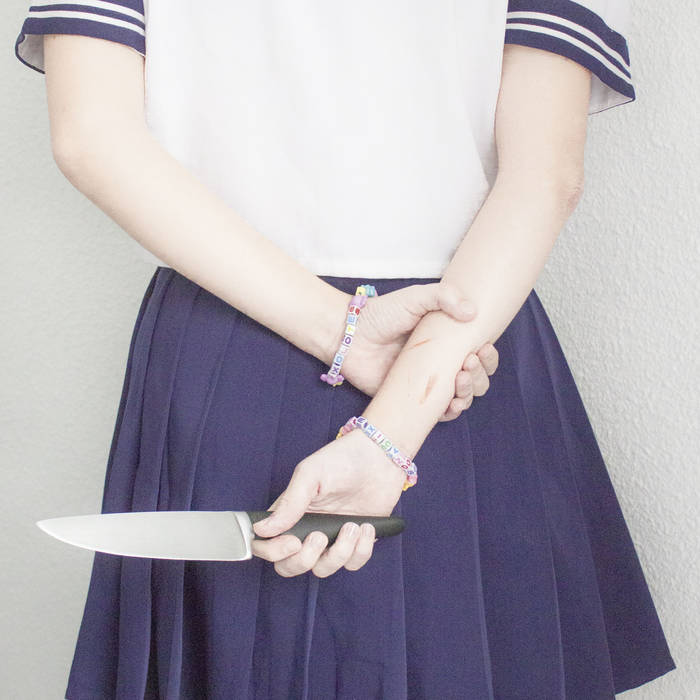 It’s impressive to see the freshness and the attitude of AXOLOTES MEXICANOS. After their debut Single, the moment has finally arrived for their first full-length - a white, 10” vinyl Mini-LP in a 500-print limited-edition. The album is surprising right from the title, emoticon included - “Holi <3” - and with its front cover and liner, which show clear tendencies toward the J-pop that came out of Tokyo’s Shibuya district. Olaya, Stephen and Juan are beginning to show us their cards, among which there are clearly a good number of aces, the first of which is their unbiased, untroubled, and iconoclastic punk philosophy, and the second of which is this fantastic album full of hedonism and color.

“Disparo De Amor” starts things off big, with no concessions - Ramones-styled pop-punk filtered through HELEN LOVE, with a keyboard marking the melody and firing point blank. It has an unremorseful chorus, a solid structure, and a percussive bridge to make you dance till you drop. Dementia takes over and this is just the beginning. “Te Miro Mientras Duermes” accentuates the pop aspect, but unveils the cynicism and madness of their lyrics: from the “Y todas las noches mirando la luna / Me acerco a tu casa para robarte la basura” (And every night looking at the moon / I go toward your house to steal your garbage) until the “Al final te he secuestrado / A la mierda el amor / Atado en la cama / Me darás tu corazón” (In the end, I’ve kidnapped you / To hell with love / Tied to the bed / You will give me your heart). It’s a time bomb blowing the foundations of love songs to bits. Another hit in their track record. And “Perro Salchicha” doesn’t get lost in the mix. Animal lovers lacking a sense of humor should please refrain from listening. Or read: “Perro Salchicha / No Sufras Más / Los Axolotes / Te Vamos A Ayudar / A La Perrera / Te Vamos A Llevar / Y Allí Te Sacrificarán” (Weiner dog / Suffer no more / The Axolotes / Are going to help you / To the pound / We will take you / And there they’ll put you down). Only the irreverent youth of this Asturian trio can write such lines and sing them so freely and with such joyous racket. But stay alert because the 10-inch’s A-side closes with “El Basurero”, a cover of the Argentinian group LA OLA QUE QUERÍA SER CHAU. We listen to “El Basurero” and we could be enjoying a new hit by PAPA TOPO with lyrics that distort and exaggerate a comedy of manners to a fever pitch. Delicious and adorable.

We turn the vinyl over and the B-side doesn’t stray far. “Interestelar”, another of their big hits, blows the foundations of love songs to bits again, narrating the trials and tribulations of a relationship with a creature from another planet. Completely hilarious, with guitars that remind you of JUNIPER MOON, the first band of their godparents, Eva and Iván, now in LINDA GUILALA. “Villalpando” returns to the poppier, more Japanese spirit, with touches even of Brazil, very much along the lines of BAND À PART and LA CASA AZUL. The song dives head first, because it couldn’t be left out, into the subject of sex. “Me da igual / No tener ni un momento para intimar / Y aunque sé que no puedo esperar / Va a acabar pareciendo castidad” (I don’t care / about not having any time for intimacy / And even though I know I can’t wait / It’s going to wind up looking like chastity). And of course, their reaction to a world that moves to a different beat than they do is indolence, and that’s how they express it in “Me Da igual”: “Todos mis amigos me hablan de amor / Prefiero mirar porno en mi ordenador / No para de estresarme la gente mayor / La vida no se trata de una competición” (All my friends tell me about love / I’d rather watch porn on my computer / Older people won’t stop stressing me out / Life is not a competition). And the exit, through the back door, furiously, violently, to the rebel yell of “Hay Una China Que Vive En Mi Piso”.

This is a solid handful of timeless anthems that burst with freshness, attitude, and so much adolescence. It gives us choruses that are not apt for delicate ears, and a collection of lines to make a punk treaty for the 21st century. You want more? Well, this is only just getting started.